If you have been wondering where exactly are Mamma Mia Greece Locations, this post will offer all the relative information!

Mamma Mia is a very popular and successful movie, filmed in 2008 in three spectacular Greek locations: Skopelos and Skiathos Islands in the Sporades island group and Damouchari, a tiny village in eastern Pelion Mt right across from the Sporades.

The Mamma Mia Greece Locations as they are presented in the film is a masterpiece of crafty film editing. The producers and director have combined those three locations and mixed them up adding props that were adapted to the settings at Pinewood Studios.

Up next I am going to tell you about the Mamma Mia Greece Locations!

Get here your Google interactive map with all the Mamma Mia locations in Greece.

Skopelos island or else Kalokairi (summer) as it was called in the movie, is the main Mamma Mia Greece Locations. Specifically:

Mamma Mia island Skopelos is the greenest island in the Aegean Sea and the second largest island in the Sporades group. 67% of its surface is covered in pine forests creating a magical place that looks like a paradise.

Sporades group is located north of Evia island and east of Pelion Mt. The group includes Skopelos, Skyros, Alonissos, Skiathos, and Peristera islands (the ones with residents) and many other smaller islands with no residents at all.

The magical wedding scenes were filmed at the astonishing church of Agios Ioannis in Kastri in northern Skopelos, about an hour from Skopelos town. Right across from the rock where the chapel stands on its top, Donna sings ‘The winner takes it all’ to Sam.

The beautiful church has about 199 very steep steps carved into the rock, but with handrails to hang on to. It is a hardship but you are compensated because when you get to the top, the view is simply spectacular.

You can spend time on the Agios Ioannis Beach with a coffee shop that also rents sunbeds and umbrellas.

Kastani beach is one of the most beautiful beaches in Skopelos with turquoise waters and no wonder why it was chosen for Mamma Mia Greece locations.

Kastani is the beach where Tania sings ‘Does Your Mother Know?’, where Sophie and Skye sing ‘Lay All Your Love on Me’, and where Donna and the dads say goodbye to Sophie and Skye and sing ‘I Have a dream’.

At Kastani beach you will find a busy beach cafe, sunbeds as well as a water-sports rental, with a party atmosphere on summer evenings. And if they play Abba songs, you can feel you are part of the film as well!

In Glysteri Beach, which is close to Skopelos Chora, is the supposed arched stone entrance to the Villa Donna (which doesn’t really exist in Skopelos). The mountainous peninsula near Glysteri beach was the departure point for Sophie’s wedding.

Glysteri is an organized beach, popular and busy with loud music and a party ambiance.

If you are a fan of the film, you can take a guided Mamma Mia tour Skopelos to spend a day visiting the Mamma Mia film locations by coach, with time for swimming and a nice lunch by the sea.

The idyllic sailing scene where Sophie and her 3 dads sing ‘Our last summer‘ was shot at Cape Amarandos in Skopelos. The stunning cape has lots of hidden coves and rocky swimming places. You can hike there but it is quite challenging so the easiest way to approach this area is by boat.

Where to stay in Skopelos

Adrina Beach Hotel (doubles from €76 B&B) in a stunning location on Adrina bay with a fabulous pool and a beachside restaurant overlooking turquoise water beach while the cozy rooms of Eleni Studios Neo Klima Skopelos (doubles from €40) with a beautiful garden delivers magnificent sea views over the Eleos Beach and is competitive on comfort and facilities.

For fine Mediterranean cuisine, go to Zoupas restaurant in Chora. The Agnanti restaurant in Glossa is famous for its good Greek cuisine, but also for its incomparable view. On the beach of Panormos, you will find the tavern of Giannis with many local Skopelos recipes. Mouria is a nice fish tavern on the beach of Agnontas.

How to get there
Skopelos is reached by ferry from Volos, Kymi, and Mantoudi ports on Evia island and Agios Konstantinos port in Fthiotida. Evia island is linked by a bridge to the mainland and is two hours drive from Athens.

Alternatively, you can fly to Skiathos and take the ferry to Skopelos. Check FerryScanner to get the best prices in the market with no hidden fees.

The locations where the filming took place in Skiathos are in the old port next to the picturesque Bourtzi. From Skiathos is the scene where Pierce Brosnan and Colin Firth, run to catch the boat that will take them to Skopelos.

All the seaside shops in Skiathos had to adjust their facades and table seatings to look as if they belong to an older era. Filming also took place in Agios Nikolaos where Sophie sends the letter to invite the 3 prospective fathers to her wedding.

Where to stay in Skiathos

The La Piscine Art Hotel, Philian Hotels and Resorts (doubles from €79 Β&Β) is set in a peaceful area, just a 5-minute walk to the center of Skiathos. The stylish hotel is adults-only and offers an Olympic-sized swimming pool and a friendly atmosphere. The Polykratis Rooms (doubles from €46 Β&Β) is a very convenient cozy property, ideal for families, just a 4-minute walk from the beach and 500 meters from Skiathos Town.

Where to eat
One of the best restaurants on Skiathos is Carnayo in the new port with Mediterranean cuisine using organic vegetables. For fresh fish go to Scuna and for traditional and fresh local flavors stop by Artesanal. A modern Greek cuisine restaurant also worth trying is the award-winning Elia’s Restaurant inside Mandraki Village Hotel.

How to get there
You can fly to Skiathos, or take the ferry from Agios Konstantinos, Mantoudi, or Volos ports.

The ‘Dancing Queen’ dance starts in Villa Donna and continues to the courtyard (both scenes were shot in Pinewood), then extends to the area outside Villa Donna (the arch in Glysteri Beach).

The route continues to the port – in the olive grove and ends at the port where the scenes were filmed in the romantic town of Damouchari in the Mouresi area along the coast of eastern Pelion in mainland Greece.

The jetty you see in the film was built especially for this scene but was dismantled to retain the peaceful and traditional scenery of Damouchari.

Damouchari tiny port is perfect for a meal with fresh fish, a dive to the 50 meters far beautiful beach, a stroll under the olive trees, or a hike to Tsagkarada, 8 km from Damouchari.

Where to Stay in Damouchari

Victoria’s Guesthouse (doubles from €65 Β&Β) is ideally set in front of Damouchari port, fitted with a terrace and brightly decorated rooms, a simply amazing house. The Damouchari Hotel (doubles from €72 Β&Β) is located right in the small fisherman’s port, with handmade breakfast, and a swimming pool in a lovely garden, to experience a dreamy Mamma Mia accommodation.

Another beautiful thing is that more and more people from Greece and all over the world are deciding to get married or renew their vows of love at the Mamma Mia Greece locations!

Where is your dream summer destination?

I’d love to hear about where you’re spending your exciting travel plans! There are so many things to do on the Mamma Mia destinations in Greece. I hope that you get the chance to visit as many as possible. Till next time, Evgenia❤️

If you would like a customized itinerary for a private tour in Greece please send your inquiry here for a quote. Thanks!

Updated September 28th, 2022 by Travel the Greek Way Are you planning to spend a... 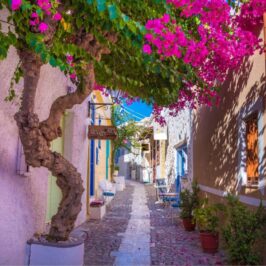 Updated September 21st, 2022 by Travel the Greek Way Syros island is located in the... 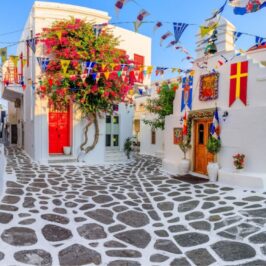 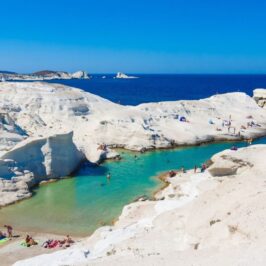 Updated August 10th, 2022 by TraveltheGreekWay Are you traveling to Greece and you are wondering... 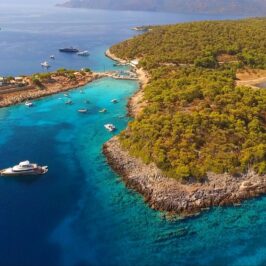 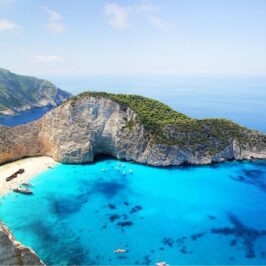 Looking for the best things to do on Zakynthos island? I have created the perfect...